Overspending in the Oil & Gas Industry

I do not recall typing up, or publishing, this post. Reading through it, I remember everything…but since it was from July of 2014, let’s just say it wasn’t fresh on my memory. I’m invoking the “back when I was a younger, dumber landman” clause for this one. Fuck…clause…now I’m thinking Claws? With all of the #EFT talk going on, I figured this was a worthy repost. As much as I would like to edit some of my typos/mistakes, I’m going to leave it in its original form (with some added images & headings).

So the prospect I am working on is just getting started and so far I am the only landman doing title on it. Once I verified title, my boss went ahead and leased the mineral owners. I wanted to take care of that, naturally, but my boss said that since the owners are very wealthy and don’t need the money, he felt that his sales pitch would go over better than mine. He likes to handle things like that and I can’t blame him. Lease negotiation is the most exciting thing we get to do as landmen. Sadly, the senior landmen all “have a better pitch.”

In order to get the title verified as quickly as possible I went to the abstract plant in town. The old man that runs their “oil and gas” records was extremely helpful. He has been working at the abstract plant since the 80s and told me he’s old enough to retire but doesn’t want to because that would mean he has to sit at home all day with his wife, bored. Talking to him for a half hour or so and I got the entire history of oil and gas in the county. The last big “wave” of leasing was in the late 80s, and he said that there have been leases and drilling by small companies since then, but no significant production.

Old man told me that the few leases he’s seen over the last two years were for around $175 an acre and a fifth royalty. The real “money makers” were for $200 an acre. He asked what my company would be offering (out of sheer curiosity he assured me), and I had to reply honestly, I didn’t know. I hadn’t spoken to my boss about the negotiations yet, but I let the old man know that I would share the details if I could get them. He got a good laugh while he readjusted his coke bottle glasses, crossed his arms, and leaned back in his chair. “Oh well, you know I’m just asking because I’m interested, no other reason. I would love to see some more activity here again.”

“Where did that price come from?”

The next time I spoke with my boss I asked him how the lease negotiation went. He said he was on his way to meet with the landowners to get them to sign the lease, and the terms they agreed on were $600 an acre at a fourth royalty. I asked how he came to those numbers, intending to share my conversation with the old man. Then my boss replied “that was our opening offer, and they accepted it.” No shit? Again I asked how he came up with those numbers for a starting offer, and he explained that the landowners’ nephew is involved in oil and gas. The nephew said any lower offers wouldn’t even be considered.

Prices Goin Up! On a Tuesday…

Rewind about 7 years to a previous crew I worked on. As our lease check continued to gain momentum and the actual leasing started to heat up, about half of the crew was given areas of interest to begin leasing. During the meeting that we all got our assignments I inquired about what our starting offer was and if we knew what other companies were starting at also. It’s always good to be informed. My crew chief said almost nonchalantly that our starting offer would be $1000 an acre, and that to our knowledge other companies were offering around $750. We intended to “blow them out of the water.” Guess what happened? When you start at $1000, there’s nowhere to go but up.

Three months later, our initial offer was $1200 because the other companies in the area had raised theirs to be competitive. Six months later and the landowners were so greedy with “bonus gluttony” that they were demanding $2000 an acre. Our client decided that the market was too aggressive, so they moved our crew to the adjacent counties. What they didn’t take into consideration was the fact that our opening offers kicked off the increasing lease bonus offers. The new counties that we moved into weren’t as greedy, and were taking leases for $500 to $750 an acre. I’m going to give you two guesses as to what our opening offer was in those new counties, but you’ll only need one.

Shales from the Crypt?

A good friend of mine worked on an absolutely ginormous due diligence project for a couple of months. One oil company was buying billions of dollars of leasehold from another, and my buddy’s broker had been hired to check the leases for “title defects.” Each acre had been assigned a commiserate dollar amount, and the deal which had been established was “find $20 million in title defects and we’ll keep you guys on the job for another couple of months.” After four months working on that project my buddy’s company had found over $17 million in title defects, but failed to reach the $20 million threshold. The oil company basically said, “thanks for all the hard work, we appreciate it. Have a good one.” A drop in the bucket. Or is it an ocean?

I can’t tell you how many times I have had to reprint documents at $1 a page that we already had, but someone failed to scan them before either throwing them away or shipping them off somewhere else. Entire days have been spent driving to some town and waiting to meet with some person that never showed up. Packages have been overnighted on Wednesdays and not even opened until Tuesdays. I’ve sent USB drives with digital copies of all the instruments included with a run sheet (that has all the hard copies of course) to attorneys that don’t know what a USB drive is. One of them asked me “how do I put that in my iPad?” I honestly don’t know whether he was joking or not.

Last night I read on some oil and gas forum a post that a landman made which said “every day a warm body works takes 3 days for a real landman to fix, and in that regard it is a renewable resource to have work if you’re a real landman.” Speaking from experience, that post is right on. When I worked in Pennsylvania I spent two weeks in the courthouse working (with my entire crew, who were useless) trying to fix the mistake that one person made. In the end, that mistake cost all of us our jobs. Things worked out for me because I got to go home, find a new landman gig, and got a raise in the process. Other people on our crew weren’t so lucky. I’m still getting calls from those people every now and then asking for work.

How Can You Support LandmanLife? Buy a koozie. It’s good for your beer!

Activists could point their fingers to this as a “smoking gun.” They shouldn’t. We’re not talking nuclear waste, chemical waste, or pollution here. Accountants might find fault, but why the fuck would they even be reading this post? The bean counters at oil companies must be insane from all the shit they have to put up with. My boss got flack once from our client because he bought a lease for $1500 and billed them for it. Our client had called and tried to negotiate that purchase. They struck out. Without us they wouldn’t have even had the lease to drill, and they were hung up on the $1500 to purchase it. Getting blinded by the short term cost often hinders people from seeing the long term profit.

I once heard a joke about a landman that was told to lease some land “no matter what.” He went to speak to the landowner, who told the landman that he would sign a lease if he got a prize pig that a neighbor owned. The landman went to his boss and asked what to do because the pig would cost $5000. His boss told him again to lease the land “no matter what.” Once the landman had the lease signed and submitted his invoice, including the $5000 pig, his boss called him and said “YOU CAN’T BILL FOR A $5000 PIG! FIX IT!” The landman resubmitted his invoice a few minutes later, for the exact same amount as before, but with no pork listed. His boss called again, “THAT’S THE SAME AMOUNT BUT WITHOUT THE PIG!”
The landman replied, “I hid the pork. But you’ll never find it.” 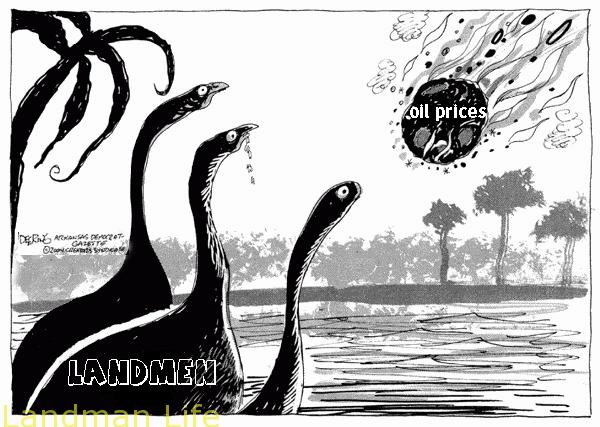