Summer of 2014, my last internship of college, oil was over $100 a barrel and I remember hearing those words as I was sitting in my mentors office at an undisclosed E&P in Oklahoma City.

“You’re a businessman first and a Landman second.”

A concept that seemed so simple but between 3 internships, countless interviews, and a business degree he was the only person that had told me that. It stuck, one of the few things that did from four and half years of college and three internships. Now, I sit here unemployed after having tried to build my career around that maxim and it hits me…this idea is the whole problem with the “Shit Cos” / the shale leveraged American E&Ps.

It’s as simple as that. Nobody thinks like a businessman. If they do they aren’t rewarded for it and so it gets driven out of them.

As I observe the chaos of the oil markets in 2020 waiting for a chance to get back into the “arena”, this is what I think needs to happen for us to not repeat 2015-2016, 2020, again and again and again. There has to be a culture change. Not necessarily a change away from shale but a culture change from “drill baby drill”, “American Energy Independence”, “Sometimes we drill wells for oil and sometimes we drill wells to make money.” But a change to business, to making dollar based, return based decisions.

Engineers kind of understand how money works, geologists sure as shit don’t but if you have an “Energy Management” degree don’t forget you have a damn business degree (unless you went to Tech). Stand up and talk and think in dollars and in rate of return and with the mindset of these projects are investments, they are supposed to MAKE MONEY.

I say that but the only way that culture change happens is if we somehow purge C-suites across Texas and get leadership with some integrity and brains (unlikely unfortunately).

The best hope that we have is that most of the sector gets wiped out or consolidated and new teams with some brains emerge from this to take American oil and gas to where it should be….run like a fucking business. That’s it, that’s what needs to change.

So kids, if you are still a young and naive Landman working inside the beast, do your best to shift your thinking this way. I promise it will pay off in the long run.

It at least will make you stick out from most of the lemmings (cough Texas Tech grads cough) that are in corporate Land departments these days. 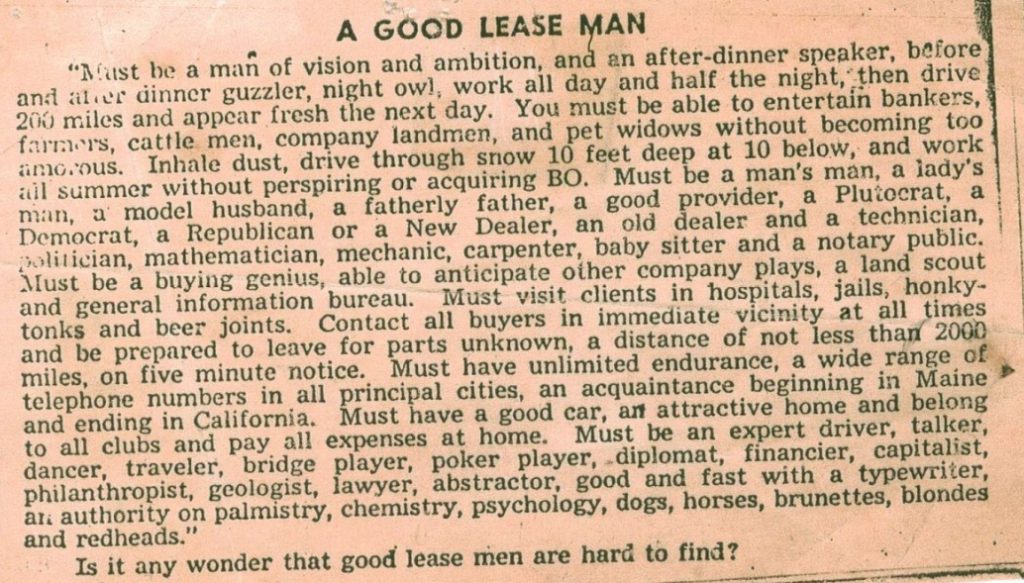